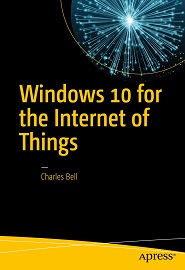 Windows 10 for the Internet of Things is for developers and enthusiasts wanting to take their skills in Windows development and jump on board one of the largest and fastest growing trends to hit the technology world in years – that of connecting everyday devices to the Internet. This book shows how to develop for Microsoft’s operating-system for devices, Windows 10 IoT Core. Readers learn to develop in C# and Python using Visual Studio, for deployment on devices such as the Raspberry Pi and the Ardunio.