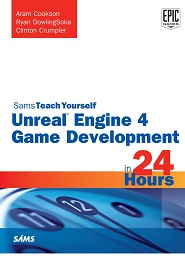 In just 24 lessons of one hour or less, learn how to start using Unreal Engine 4 to build amazing games for Windows, Mac, PS4, Xbox One, iOS, Android, the web, Linux–or all of them!
Sams Teach Yourself Unreal Engine 4 Game Development in 24 Hours’ straightforward, step-by-step approach shows you how to work with Unreal Engine 4’s interface, its workflows, and its most powerful editors and tools. In just hours you’ll be creating effects, scripting warfare, implementing physics–even developing for mobile devices and HUDs. Every lesson builds on what you’ve already learned, giving you a rock-solid foundation for real-world success.

Step-by-step instructions carefully walk you through the most common Unreal Engine 4 game development tasks.
Practical, hands-on examples show you how to apply what you learn.
Quizzes and Exercises help you test your knowledge and stretch your skills.
Notes and tips point out shortcuts and solutions.