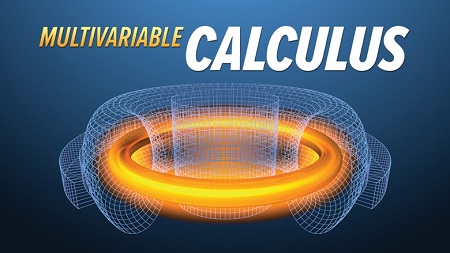 Calculus offers some of the most astounding advances in all of mathematics—reaching far beyond the two-dimensional applications learned in first-year calculus. We do not live on a sheet of paper, and in order to understand and solve rich, real-world problems of more than one variable, we need multivariable calculus, where the full depth and power of calculus is revealed.

Whether calculating the volume of odd-shaped objects, predicting the outcome of a large number of trials in statistics, or even predicting the weather, we depend in myriad ways on calculus in three dimensions. Once we grasp the fundamentals of multivariable calculus, we see how these concepts unfold into new laws, entire new fields of physics, and new ways of approaching once-impossible problems.

With multivariable calculus, we get

new tools for optimization, taking into account as many variables as needed;
vector fields that give us a peek into the workings of fluids, from hydraulic pistons to ocean currents and the weather;
new coordinate systems that enable us to solve integrals whose solutions in Cartesian coordinates may be difficult to work with; and
mathematical definitions of planes and surfaces in space, from which entire fields of mathematics such as topology and differential geometry arise.
Understanding Multivariable Calculus: Problems, Solutions, and Tips, taught by award-winning Professor Bruce H. Edwards of the University of Florida, brings the basic concepts of calculus together in a much deeper and more powerful way. This course is the next step for students and professionals to expand their knowledge for work or study in many quantitative fields, as well as an eye-opening intellectual exercise for teachers, retired professionals, and anyone else who wants to understand the amazing applications of 3-D calculus.

Designed for anyone familiar with basic calculus, Understanding Multivariable Calculus follows, but does not essentially require knowledge of, Calculus II. The few topics introduced in Calculus II that do carry over, such as vector calculus, are here briefly reintroduced, but with a new emphasis on three dimensions.

Your main focus throughout the 36 comprehensive lectures is on deepening and generalizing fundamental tools of integration and differentiation to functions of more than one variable. Under the expert guidance of Professor Edwards, you’ll embark on an exhilarating journey through the concepts of multivariable calculus, enlivened with real-world examples and beautiful animated graphics that lift calculus out of the textbook and into our three-dimensional world.

A New Look at Old Problems

How do you integrate over a region of the xy plane that can’t be defined by just one standard y = f(x) function? Multivariable calculus is full of hidden surprises, containing the answers to many such questions. In Understanding Multivariable Calculus, Professor Edwards unveils powerful new tools in every lecture to solve old problems in a few steps, turn impossible integrals into simple ones, and yield exact answers where even calculators can only approximate.

With these new tools, you will be able to

integrate volumes and surface areas directly with double and triple integrals;
define easily differentiable parametric equations for a function using vectors; and
utilize polar, cylindrical, and spherical coordinates to evaluate double and triple integrals whose solutions are difficult in standard Cartesian coordinates.
Professor Edwards leads you through these new techniques with a clarity and enthusiasm for the subject that make even the most challenging material accessible and enjoyable. With graphics animated with state-of-the-art software that brings three-dimensional surfaces and volumes to life, as well as an accompanying illustrated workbook, this course will provide anyone who is intrigued about math a chance to better understand the full potential of one of the crowning mathematical achievements of humankind.

Dr. Bruce H. Edwards is Professor of Mathematics at the University of Florida. He earned his Ph.D. in Mathematics from Dartmouth College. He has been honored with numerous Teacher of the Year awards as well as awards for his work in mathematics education for the state of Florida.