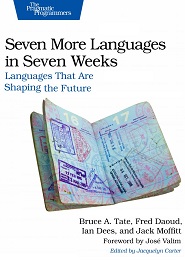 Great programmers aren’t born–they’re made. The industry is moving from object-oriented languages to functional languages, and you need to commit to radical improvement. New programming languages arm you with the tools and idioms you need to refine your craft. While other language primers take you through basic installation and “Hello, World,” we aim higher. Each language in Seven More Languages in Seven Weeks will take you on a step-by-step journey through the most important paradigms of our time. You’ll learn seven exciting languages: Lua, Factor, Elixir, Elm, Julia, MiniKanren, and Idris.
Learn from the award-winning programming series that inspired the Elixir language. Hear how other programmers across broadly different communities solve problems important enough to compel language development. Expand your perspective, and learn to solve multicore and distribution problems.
In each language, you’ll solve a non-trivial problem, using the techniques that make that language special. Write a fully functional game in Elm, without a single callback, that compiles to JavaScript so you can deploy it in any browser. Write a logic program in Clojure using a programming model, MiniKanren, that is as powerful as Prolog but much better at interacting with the outside world. Build a distributed program in Elixir with Lisp-style macros, rich Ruby-like syntax, and the richness of the Erlang virtual machine. Build your own object layer in Lua, a statistical program in Julia, a proof in code with Idris, and a quiz game in Factor.
When you’re done, you’ll have written programs in five different programming paradigms that were written on three different continents. You’ll have explored four languages on the leading edge, invented in the past five years, and three more radically different languages, each with something significant to teach you.