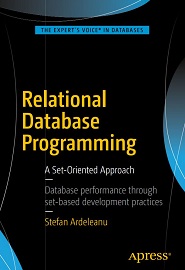 Learn the best way of writing code to run inside a relational database. This book shows how a holistic and set-oriented approach to database programming can far exceed the performance of the row-by-row model that is too often used by developers who haven’t been shown a better way.
Two styles of programming are encountered in the database world. Classical programming as taught in many universities leads to an atomic, row-oriented, and procedural style inspired by the structured models of programming. In short, many application developers write in the relational database exactly like in the user interface. The other style of programming is holistic, data set oriented, and coded mainly in SQL. This is the style of the database developer.
The set based and holistic style of development is not promoted enough in universities, and many application developers are not fully aware of it. There are many performance issues all over the world in relational databases due to the use of the atomic and inappropriate style of programming. This book compares the two styles, and promotes the holistic style of development as the most suitable one. Examples are given to demonstrate the superiority of a set-based and holistic approach.

Two Styles of Database Development is aimed at application developers willing to adapt their programming styles in return for better-performing applications. It’s for students and new developers wanting to position themselves as having database expertise and build a reputation for developing highly-performant database applications.