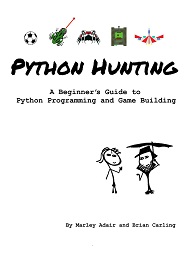 Works beautifully with Linux, Mac or Windows. Will even work on a Raspberry Pi.
326 pages of spinning, shooting, catching, raining, eating, scoring, dying fun.
Python Hunting throws beginners straight into the cool, creative side of things.
To get the basics you’ll build a Falling Rain program and a character who puts up his umbrella to keep dry.
This runs smoothly into a Space Invaders game with randomly moving invaders and arcade style scoring. After all, space invaders aren’t so different from falling rain.
Then build the classic Pong game but with some extras like a bat that hits the ball to accelerate it and balls that bounce in a slightly random fashion.
Next a Fly Catching Frog with an extending tongue. If you don’t catch enough flies you’ll starve but the flies appear randomly on the screen and only for a limited amount of time.
And finally a two player Tank Battle with tanks you can move around the screen, moving obstacles, ammo dumps and bouncing shells.
All though this you learn how to add start and game over screens, sound effects, graphics, game statistics such as lives and scores, and more, with each game introducing new skills and ideas.
Python Hunting covers all the basics, such as classes, functions, loops and logic, but relates them all to the more fun aspects of programming.
The steps are clear, concise and humorous. You’ll learn the lingo and some cool shortcuts. You’ll learn some maths but won’t be confused by it. You might even learn a good joke or two. More importantly you’ll learn genuine programming skills that are the foundations for working in the computer industry, regardless of whether you want to be a game builder or head off to some other area. The basics are the same and this is a great place to start.
We teach graphics using the Pygame graphics library. It’s easy to use and we show you how. If you want to learn graphics for games and animations we strongly recommend you use Pygame because you can simply do more with it than other GUI libraries.
When author Marley Adair first wanted to learn programming aged 8 he bought a few books on Python programming but they didn’t teach the kind of programming he wanted to learn. He wanted to build games and animations, they taught him how to create print statements, calculators, data charts and a few rather dull text based games. So he taught himself how to build proper graphical games and then wrote the book he wished he could have bought. This is that book.