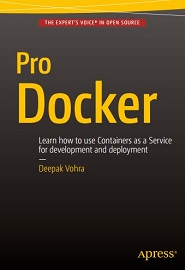 In this fast-paced book on the Docker open standards platform for developing, packaging and running portable distributed applications, Deepak Vorha
discusses how to build, ship and run applications on any platform such as a PC, the cloud, data center or a virtual machine. He describes how to install and create Docker images. and the advantages off Docker containers.The remainder of the book is devoted to discussing using Docker with important software solutions. He begins by discussing using Docker with a traditional RDBMS using Oracle and MySQL. Next he moves on to NoSQL with chapter on MongoDB Cassandra, and Couchbase. Then he addresses the use of Docker in the Hadoop ecosystem with complete chapters on utilizing not only Hadoop, but Hive, HBase, Sqoop, Kafka, Solr and Spark.
What You Will Learn