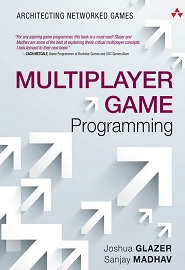 Networked multiplayer games are a multibillion dollar business: some games now attract tens of millions of players. In this practical, code-rich guide, Joshua Glazer and Sanjay Madhav guide you through every aspect of engineering them. Drawing on their immense experience as both game developers and instructors, the authors lead you through building a robust multiplayer architecture, and creating every engine-level system. You’ll learn through in-depth working code examples for two complete games: an action game and a real time strategy (RTS) game.
First, Madhav and Glazer review the essentials of networking and network programming from the standpoint of game developers. Next, they walk through managing game data transmission, updating game objects across the network, and organizing the devices that join your game. You’ll learn how to ensure reliable performance despite the Internet’s inherent inconsistencies, and how to design game code for maximum security and scalability. The authors conclude by addressing two increasingly crucial issues: incorporating gamer services and hosting your games in the cloud.
This guide’s content has been extensively tested through the authors’ multiplayer game programming courses at USC. It is equally valuable both to students and to working game programmers moving into networked games.
Coverage includes

About the Website C++ source code for all examples is available at github.com/MultiplayerBook . Instructors will also find a full set of PowerPoint slides and a sample syllabus.