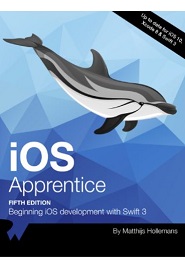 If you’re new to iOS and Swift 3, or to programming in general, learning how to write an app can seem incredibly overwhelming.

That’s why you need a guide that:

The iOS Apprentice series doesn’t cover every single feature of iOS – it just focuses on the absolutely essential ones that you need to know.

Instead of just covering a list of features, the iOS Apprentice series does something much more important: it explains how all the different building blocks fit together and what is involved in building real apps.

You’re not going to create quick example programs that demonstrate how to accomplish a single feature. Instead, you’ll develop complete, fully-formed apps that are good enough to submit to the App Store!