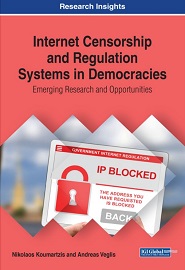 As the internet has been regulated from its conception, many widespread beliefs regarding internet freedom are actually misconceptions. Additionally, there are already two main categories of internet regulation systems in use: the open and the silent IRSs. Unexpectedly, the former are quite popular among authoritarian regimes, while the latter are implemented mainly in Western democracies. Many IT experts and media analysts criticize Western governments choice to use a silent IRS, expressing their fear that this could set a dangerous precedent for the rest of the democratic countries around the world. New regulation systems must be developed and implemented that are more acceptable to the general public.

Internet Censorship and Regulation Systems in Democracies: Emerging Research and Opportunities is an essential reference source that discusses the phenomenon of internet regulation in general and the use of internet regulation systems (IRSs) by authoritarian regimes and Western democracies and proposes a blueprint for the development and implementation of a fair internet regulation system (FIRS). using original research conducted in seven countries from 2008 to 2017. The book also considers the function of a fair internet regulation system in terms of maximizing its effectiveness, keeping the implementation cost low, and increasing the probability of acceptance by each countrys general public. Featuring research on topics such as governmental control, online filtering, and public opinion, this book is ideally designed for researchers, policymakers, government officials, practitioners, academicians, and students seeking coverage on modern internet censorship policies within various international democracies.