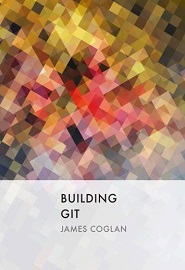 Building Git is a deep dive into the internals of the Git version control system. By rebuilding it in a high-level programming language, we explore the computer science behind this widely used tool. In the process, we gain a deeper understanding of Git itself as well as covering a wide array of broadly applicable programming topics, including:

Data structures
How Git stores content on disk to make effective use of space, make the history efficient to search, and make it easy to detect differences between commits
Using diffs to efficiently update the contents of the workspace when checking out a new commit
Effectively using simple in-memory data structures to solve programming problems
Parsing and interpreting a query language for addressing commits

Concurrent editing
How Git uses branches to model concurrent edits
Algorithms for detecting differences between file versions and merging branches back together
Why merge conflicts happen, how they can be avoided, and how Git helps users prevent lost updates
How merging can be used as the basis for numerous operations to edit the commit history