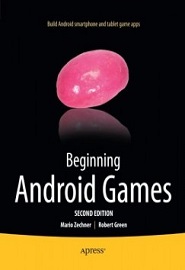 Beginning Android Games, Second Edition offers everything you need to join the ranks of successful Android game developers, including Android tablet game app development considerations. You’ll start with game design fundamentals and programming basics, and then progress toward creating your own basic game engine and playable game apps that work on Android and earlier version compliant smartphones and now tablets. This will give you everything you need to branch out and write your own Android games.
The potential user base and the wide array of available high-performance devices makes Android an attractive target for aspiring game developers. Do you have an awesome idea for the next break-through mobile gaming title? Beginning Android Games will help you kick-start your project. This book will guide you through the process of making several example game apps using APIs available in new Android SDK and earlier SDK releases for Android smartphones and tablets:
The fundamentals of game development and design suitable for Android smartphones and tablets
The Android platform basics to apply those fundamentals in the context of making a game, including new File Manager system and better battery life management
The design of 2D and 3D games and their successful implementation on the Android platform
This book lets developers see and use some Android SDK Jelly Bean; however, this book is structured so that app developers can use earlier Android SDK releases. This book is backward compatible like the Android SDK.
What you’ll learn :
How to set up/use the development tools for creating your first Android game app
The fundamentals of game programming in the context of the Android platform
How to use the Android’s APIs for graphics (Canvas, OpenGL ES 1.0/1.1), audio, and user input to reflect those fundamentals
How to develop two 2D games from scratch, based on Canvas API and OpenGL ES
How to create a full-featured 3D game
How to publish your games, get crash reports, and support your users
How to complete your own playable 2D OpenGL games