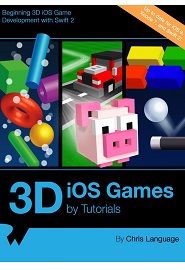 Learn How to Make 3D iOS Games!
Learn how to make 3D games in Swift, using Apple’s built-in 3D game framework: Scene Kit. Through a series of mini-games and challenges, you will go from beginner to advanced and learn everything you need to make your own 3D game!
By the time you’re finished reading this book, you will have made 4 complete mini-games, including games similar to Fruit Ninja, Breakout, Marble Madness, and Crossy Road!
Topics Covered in 3D iOS Games by Tutorials: